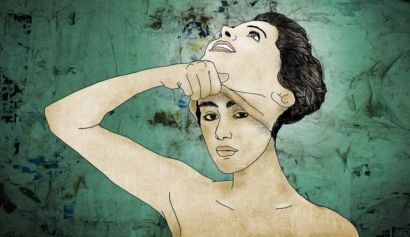 The first time Bea came out to us, she was in high school and I was serving as an associate pastor in a church. John and I naively wondered if she really knew, or if it was part of her developmental confusion. So I told her, “Why don’t you pray and live with it for a while, and see if it still rings true.” I genuinely meant that, and at the same time, John and I didn’t really want this to be her reality but we didn’t want it to be ours either. We greatly love both of our kids, Andrew and Bea, and have sought to consistently show them. We had just envisioned life going differently.

Because my relationship with God matters most to me, I intensely sought God, reading, praying, and talking with godly people whom I loved and respected. I asked myself as much as God, What do I do with this? I wanted to honor God in all of this, but felt fearful. What I loved was Bea’s confidence of God’s love for her was solid throughout. She said to me, “Why wouldn’t it be okay for me to be gay, if God made me this way?”

While I loved that, I admit I spent too much time being afraid of losing my pastoral position. I knew my denomination’s position on human sexuality and wondered what it would mean to them if they knew Bea was gay, so I asked her to talk with supportive friends, but not to talk about it openly at church. I regret that now.

I continued to seek God from the depths of my being. As I did, I felt the Lord direct me to just love and accept her. That was the bottom line and the turning point for me in letting go of the rest, all of the fears and doubts. The Lord showed me what mattered was to love my child even as He did – and does. So I let go of my fear and I focused on my beloved daughter, God’s love for her and mine.

Around this time, Bea went to a Christian conference. She was listening to the speaker challenge teens to take off their masks. She was texting me from the service, telling me that she couldn’t live behind masks anymore. She needed to be free to be who she was. I affirmed that and told her that she did need to be free. She was worried about my job, and I told her what mattered most was her.

When she came home, I asked her if I had made her carry my stuff – all of those concerns I had been having and the secrecy I had asked her to live in because I was afraid of losing my pastoral position. She was quiet, and I knew her answer without her saying it. With tears in her eyes, my heart broke. I told her I was sorrier than I could ever express, and she forgave me. I told her that if she needed me to, I would leave the pastorate because she mattered more.

While this part of the story is filled with pain, it was also met with grace – God’s grace and Bea’s grace. I was changed by it. This journey has not only deepened my relationship with Bea, it has sensitized me to others on this journey. But it doesn’t end there.

Bea came out to us as transgender a year ago. I began to suspect a year beforehand, which I believe was God trying to prepare me for it. When she came out to us I felt an inner confirmation because there had been many moments throughout her life when I would notice something – little things that don’t even make sense unless it is your own child – and I would wonder about it. When she finally came out to us, it made complete sense. It seemed congruent with who she genuinely was and is.

And even though God may have been preparing me for this, for my daughter to “take off her mask,” I remember seeing a transgender woman a couple of years earlier and struggling with that. God brought all of this back to my memory when Bea opened up to us and I confessed my sin to God.

You see, with God’s help, I have come to see all of these little moments (and especially the big moments!) differently through the grace of God. Transgender persons are people of integrity. They are living on the outside what is on the inside. That takes more honesty than most of us are able to express, and it takes great courage because the discrimination and hatred towards them is astounding, given that 1 in 12 transgendered persons are killed and another 41% attempt suicide.

Think about that for a moment. If they are not killed by someone else, almost half will kill themselves.

What helps transgender persons survive is the love and support of their parents. Bea experienced God in a profound way when she embraced the truth to herself that she was indeed “she.” She experienced God’s blessing on her as God’s beloved daughter. It was a re-birth into her true identity. John and I put together a renaming ceremony to mark this life-changing event, and invited those closest to her. It was meaningful to celebrate with her in this way, as we worshipped God and blessed our daughter.

John and I deeply love both our kids and it has become a mission and priority to not only show them, but all like Bea, who are on this journey, that they are loved and that they matter for who they are. We have all heard the stories of people that have pleaded with God to remove this from them, and it didn’t happen. We have heard the news stories about kids who commit suicide because there was no one to love and support them, or because they were bullied. What is astounding is that there are many kids living on the streets who have been kicked out of the house because they are gay.

God created us all in His own image, no matter what gender or orientation we claim. All are invited to the table as the beloved of God. I am greatly saddened by the way parts of the church at large have communicated the opposite, not only judging but excluding them as well. I believe this to be against what is of God. When we deny LGBTQ persons from being a part of the church, then we are denying part of the Body of Christ from being in the church. How can we turn away from Christ Himself?

Though I now minister in other settings I was naïve in my fear with the denomination. The denomination continues to uphold heterosexual marriage alone as the ideal and celibacy outside of that. A minister may disagree, as long as they teach the denomination’s position. In addition, our family is deeply grateful for the love and support and welcome that Bea and we as her parents have received from our local church, Resurrection Covenant. The church models welcome and compassion to all who come.

We as the whole church need to do the same, to genuinely listen and to be a loving, welcoming, safe place, just like the God who calls us all by name. I am grateful to those who have been a part of my transformational process, and who will still.

Eva Sullivan-Knoff, Wife, Mom, Minister, Spiritual Director and Retreat Leader, seeking to live a life in communion with God, and in coming alongside others. My husband, John and I have two grown kids, Andrew and Bea who we love dearly.